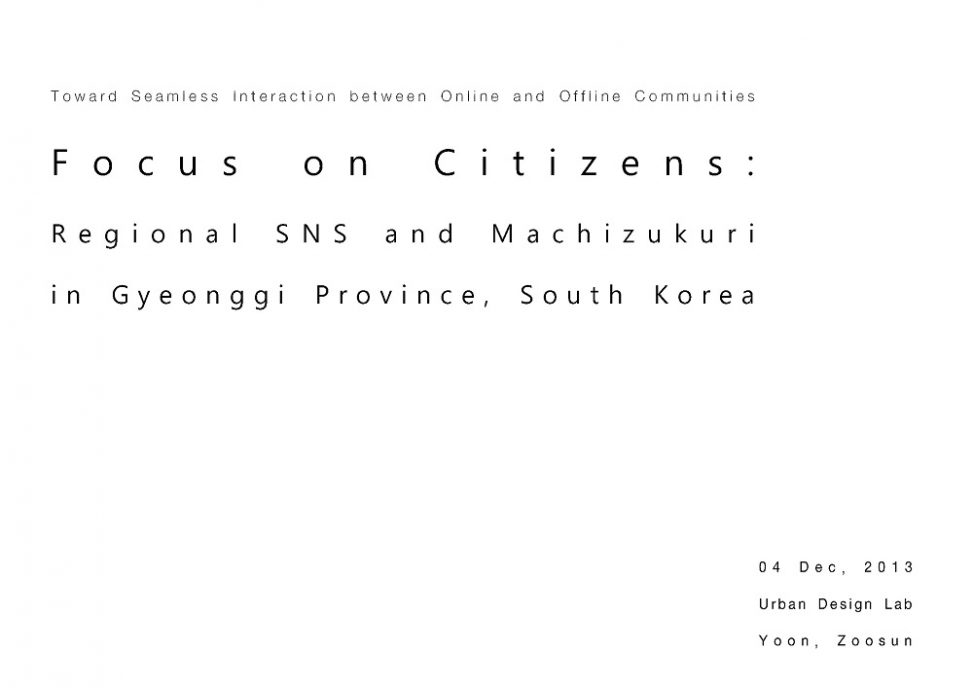 “Urban × ICT 06” guest speaker, Mr. Zoo-Sun, Yoon introduced his research on the roles of regional SNS in recently developed apartment complexes, located outside of Seoul, South Korea and discussed the possibilities of Korean regional SNS as a participatory planning tool in high-rise high-density residential areas in comparison with that in other Asian societies.

Korea is recognized as one of the fastest growing countries in the world. However, highly compressed economic growth along with rapid urbanization since the 1960s led to severe housing shortage. In order to solve the housing problem, the Korean government had promoted a high-rise high-density apartment construction policy. As a result, while housing supply ratio increased from 71.2% in 1980 to 108.7% in 2007, short-term massive construction also caused undesirable sideeffects such as poor infrastructure, lack of participation and uniform landscape.

Meanwhile, since the late 1990s, participatory planning (Machizukuri) has become a new paradigm in Korea to overcome the limitations of modern urban planning. Nevertheless, as the ratio of apartments accounts for 60% of total residential housing, Machizukuri regarding apartments has seldom been conducted. In general, participation works best when the group is small and located in rural areas. However, conventional participatory planning methods in high-rise high-density urban areas revealed many limitations for its population density and mobility. Although face-to-face (FTF) communication is still important and can never be replaced, ‘regional SNS’ has recently emerged to supplement these limitations.

Upon giving the lecture, the speaker discussed the possibilities of Korean regional SNS as a participatory planning tool in high-rise high-density residential areas in comparison with that in other Asian societies. Discussion further extended into research concept and research methodology.