Do you think Bangkok ready to be a creative city? What is the specific characteristic of the creative district in Bangkok? 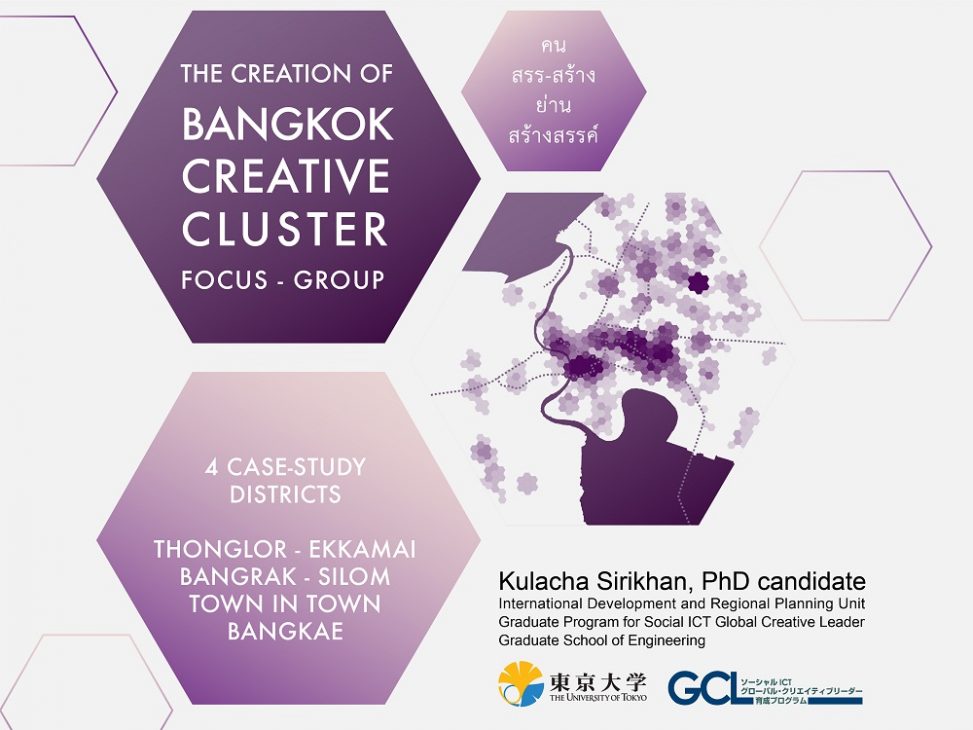 The Creation of Creative Cluster on Emerging-Market Cities: Case Study in Bangkok, Thailand

Clusters are geographic concentrations of interconnected companies, specialized suppliers, service providers, firms in related industries, and associated institutions in a particular field that compete but also cooperate. Inter-connected enterprises co-locate for economic purposes. However, creative cluster differs from other business and industrial clusters. They drive from positive externalities from the diversity of cities themselves (Lorenzen, 2008: Kong,2009). Creative clusters may enjoy opportunities and benefit from positive externalities of diverse economic activities in a city. The spatial concentration of creative industries in urban area refers to the Urbanization economies approach.

From the first critical juncture: Planting the Seeds of creating industry system (2002-2010), SMEs, OTOP Programs, and various public organizations have been set up aimed to promote local culture and local production and tackle the inadequate body of knowledge development respectively. The concept of creative economy promotion policy has been implementing for the last two decades. Several policies and following projects related to creative cities have been rising during the last five years. However, it did not inspire a far-reaching or radical change in urban planning. It is just a buzzword indicating policy-makers intention to be seen to catch up with global trends.

The results of the study indicate that creative industries tend to agglomerate in city-fringe and subsector areas. Creative goods have more clusters in the West part of Bangkok on radius road. Creative services have more clusters in the East part of Bangkok on a ring road. Expressway corridor seems to have more influence on agglomeration rather than public transportation. Three horizontal linkages connect between vertical expressway; Sukhumvit, Ladprawn, and Rama IV Street. Comparing the BTS Sukhumvit line and the Mochit line, the Sukhumvit line tends to have more level of clustering.

The notion of creative clusters arises among policymakers. It has been tied up with strategies of culture-led urban regeneration (Flew,2010).
City brand making and the redevelopment of inner areas associate with cultural infrastructure developments. Thus, the location pattern in Bangkok contrasts with the idea of focusing on inner area regeneration. The neglect of suburban development may support the image of homogeneous development (boring suburban).

These could refer to the cost of creative workers living, including the cost of time spent traveling, as well as the creative infrastructure accessibility. These factors show that Urbanization economies are still very limited. Therefore, even though the image of the various districts in Bangkok is modern as other global cities. But Bangkok still has many challenges in the preparation of the creative ecosystem.

This research aims to clarify a creative industry ecosystem in the intra-city scale in the case of developing countries that shift from industrial-based economic to a knowledge-based economy. This research gives a clear perspective on the impact of creative economy promotion policy implementation in Thailand during the last two decades on urban development perspective. Analyses take place from the policy level, city level, and district level.
There are 2 main hypothesises in this study. First, organizational network and creative amenities are the key infrastructures for creative economy promotion. And, five components support creative cluster emerging are including proximately, diversity, attractiveness, affordability, and accessibilities. From institutional analysis in policy level, macro-spatial agglomeration in city-wide level, to case-study level, it is required to conduct qualitative analysis on “location decision” and “Networking” to prove the results from policy and city-wide level.

Focus-group method is the key analysis of case-study level. I would like to integrate the Global Design Workshop C with my case-study level primary data collection on “location decision” and “Networking” of creative firms in Bangkok. The objective is to solicit opinions and recommendations from a creative related business on local spatial agglomeration strategies, local institutional structure, and creative networking.
The target participants are the business owners from 4 districts from 4 case-study areas. The discussion divided participants in to 4 groups by district. The issues had been discuss cover 3 issues including; location decision, firm networking, and policy impact.

The outcomes of focus-group are opinions and recommendations from a creative related business on three issues, including; location decision, firm networking, and policy impact.
Creative cluster differs from other business and industrial clusters. They drive from positive externalities from the diversity of cities themselves. However, there is a lack of synchronization programs from National to Local governments in promoting the creative ecosystem. The complexity of government structure creates the confusion of the ownership and lack of guidance of channel to participate. Although, the light is coming from the arising of the Place-specific development plan since the mid of the 2010s. Besides, an entrepreneur in creative industries is prevalently started on a small and medium scale by the young generation. These small and medium scale businesses have limitations in investment. From the discussion, the majority of participants reveal that they tend to choose their existing assets to reduce the initial cost and uncertainty factors. This result links to the findings of location patterns where creative clusters occur across the residential areas. Thus, place-bonding becomes an important factor in creative cluster development because the location has the potential to act like a brand, image, and symbolic value.
Moreover, the role of place identity produces and supports relational resource. Tacit knowledge transmission is tied to place and be part of an existing cultural environment. Thus, civic engagement is supported by the flow of knowledge integration to find a suitable solution for the community to improve their creative environment.
For the future requirement, the creative entrepreneurs expect a governmental to play-role as a platform for a new matching and co-creation. Co-agglomeration should be more intense between smaller firms because small gain and proximity increase concentration to other services and lower transaction costs compared to larger firms. Lastly, the majority of the participants agree that the future policy should mainly consider on creating a sense of ownership for creative entrepreneur engagement, and required a tailor-made solution, and enriching a unique place-identity by supporting a place-based development plan.

The key requirements to support the creative ecosystem in Bangkok from focus-group discussion include the sense of ownership, tailor-made solution, and place-based plan. These could be a policy recommendation for policymakers. Since there was a small group of discussion and an accessibility limitation for a creative entrepreneur during a working day. There is some possibility to collaborate with authority organization for further research and create n actual engagement. The next participation should be more mobile to a particular district in a small discussion. Besides, public awareness and public communication are a useful tool for social knowledge contribution through an article for the Creative Economy Agency and the Urban Design and Development Center. Since this focus-group is received support from the Creative Economy Agency for the venue supporting and the Urban Design and Development Center for the public relations support and providing a staff team. The first article will focus on the findings at Bangrak and Thonglor district, which are the pilot creative district by the Creative Economy Agency. And the second will be a cross finding synthesis with the GoodWalk project:A Study of Walking Accessibility to Urban Facilities and Walkablity Index in Bangkok Metropolitan Region  by the Urban Design and Development Center.